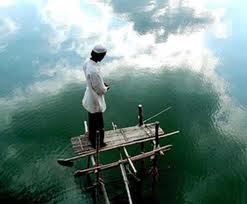 This time I will explain the Benefit of Wudhu.
Wudhu is an integral part of Shalat. Shalat will not be valid if not accompanied with Wudhu.

Wudhu is such a beautiful thing. It is done so that we can purify ourselves before we stand for prayer in front of Allah. And all of us make wudhu, because we know that without it our prayer will not be valid.
But usually we do it routinely, swiftly washing our hands and feet, splish splash on the face, a quick wipe over the head and we are done, not thinking much of it. And sometimes we even get lazy and don’t do it properly, especially at times like Fajr, when we are sleepy and during cold weather.
But there is more to wudhu than just being a condition for worship. Something that makes it more than just a routine thing before prayer…… something higher and more complete…. something that most of us neglect or overlook.
And that is…..that the very act of wudu is a form of worship in itself.
By performing wudhu you can get closer to Allaah….you can increase your Imaan and strengthen your faith. By performing wudhu, you can intensify your love for Allaah and His Messenger (Sall Allahu Alayhi wa Sallam)…and you can have your sins forgiven. And how can one do all that ?
Every time you make wudhu, be conscious of Allaah, your Rabb, and remember that it is Him, Who ordered you to perform wudhu in the first place. And you are carrying out His Orders, His Command….you are obeying Him. And you love to obey Him. So be conscious of your obedience to Him and thank Him for enabling you to carry out His Command as He says:
(O you who believe! When you intend to offer As-Shalat (the prayer), wash your faces and your hands (forearms) up to the elbows, rub (by passing wet hands over) your heads, and (wash) your feet up to ankles) [Surah Maidah:6]
This will increase your love for Allaah, and strengthen your Imaan….and improve your relationship with Him. It will make you more conscious of Him when you stand in front of Him in prayer and give you more Khushoo.


And whenever you do wudhu, think of the People who will have bright hands and faces on the Day of Resurrection and know that if you try to do your wudhu properly, doing it sincerely for the sake of Allaah, then He will make you among those.


The Prophet (sal Allaahu Alayhi wa Sallam) said: “(On the Day of Resurrection) You will have distinctive marks “Al-Ghurr-ul- Muhajjalun” which nobody among the peoples (except you) will have; you would come to me (at the Cistern of al-Kauthar) with blazing forehead and bright hands and feet on account of the traces of ablution.” (Muslim)


Try and maintain your wudhu at all times as this is a sign of a believer. The Prophet (sal Allaahu Alayhi wa Sallam) said: “Only the believer will remain with his ablution (sustaining it at all times).” (Saheeh al-Jamee) And even if you have difficulty in doing wudhu, like cold weather, or any other situation that makes wudhu difficult, still try your best to maintain it, since there is tremendous reward.


The Prophet (sal Allaahu Alayhi wa Sallam) said: “Shall I not tell you something by which Allah effaces the sins and elevates ranks (in Jannah)?” The Companions said; “Certainly, O Messenger of Allah.” He said, “Performing the Wudhu thoroughly in spite of difficult circumstances, walking with more paces to the mosque, and waiting for the next prayer after observing a prayer; and that is mindfulness”. (Muslim)
And don’t forget the Siwaak. It is something that Allaah and His Messenger love. He (sal Allaahu Alayhi wa Sallam) said: “Siwak is a purification for the mouth and satisfaction for the Lord”. (al- Nisaee and Ibn Khuzaima -Sahih at Targheeb)
And when you finish wudhu, be sure and say the Sunnah duas that the Prophet (sal Allaahu Alayhi wa Sallam) taught us to say AFTER we are done with wudu.
Remember there are NO duas to be said during wudhu.
There is nothing proven about that from the authentic Sunnah.
Just START your wudhu with Bismillaah and when you are DONE, then say the following:
1) Ashhadu an laa ilaaha ill-Allaah wahdahu laa shareeka lah, wa ashhadu anna Muhammadan abduhu wa rasooluhu. (Meaning: I bear witness that there is no god except Allaah alone, with no partner or associate, and I bear witness that Muhammad is His slave and Messenger.) (Muslim)
2) Allaahumm ajalni min al-tawwaabeena wajalni min al-mutatahhireena (Meaning: O Allaah, make me one of those who repent and make me one of those who purify themselves). (Tirmidhi-Saheeh by Albaani)
3) Subhaanaka Allaahumma wa bi hamdika, ashhadu an laa ilaaha ill anta, astaghfiruka wa atoobu ilayka (Meaning: Glory and praise be to You, O Allaah, I bear witness that there is no god but You, I seek Your forgiveness and I repent to You) (al-Nasaai, etc.- Saheeh by Albaani)
May Allaah make us among those who purify themselves for His sake, physically as well as spiritually.

Posted by Agus Takaful at 2:48 AM No comments:

Hi, everyone.
I Wanted to share practical ways for healthy with Salat movement.

Salat is one of the five fundamental requirements that a Muslim is obligated to perform. Salat is given the highest priority in the Holy Quran.

There are many benefits of Salat described in the Book of Allah. It says. innassalata tanha anil fahsha'i. Surely Prayers restrain one from indecency (29:49) In chapter Luqman, we read that when Luqman was giving advice to his son, the first and the foremost on his mind was to remind his son,  ya bunayya aqimissalat " O my dear son,! observe Prayer "(31:8)

According to a hadith the Prophet of Islam (Peace be upon him) is reported to have said, inna fissalati shifa'a "verily there is cure in salat".

According to a Muslim solar, as reported in monthly urdu magazine, Tahazibul Akhlaq, , a Muslim who offers salat regularly has very little chance of getting arthritis as we exercise our bones and joints while we offers salat.

In the light of this Hadith we shall endeavor to describe some orthopedic benefits of salat in this short note.


Posted by Agus Takaful at 7:57 PM No comments: